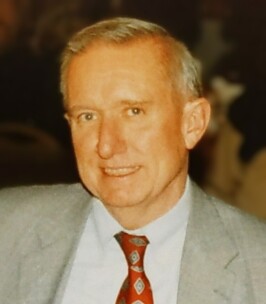 Obituary for Lawrence A. McGrail

GRAFTON: Lawrence Anthony McGrail, 84, of Grafton, MA passed away on Wednesday, September 21st, with his loving family and passionate caregivers by his side.

Along with his beloved wife Gail (Riordan) McGrail of Grafton, Larry is survived by his four children and five grandchildren, who were his pride and joy and in his own words, the greatest accomplishments of his life. His children include Maureen McGrail and husband Randy Fritz of Crown Point, Indiana, Gene McGrail of Saint Petersburg, Florida, Matthew McGrail and his wife Mary (Kavanagh) McGrail of Auburn, Massachusetts and Andrew McGrail and his predeceased wife Jennifer (Goguen) McGrail of Keene, New Hampshire. His grandchildren include Lily Fritz of Indiana, Conor and Molly McGrail of Massachusetts, and Adam and Lucas McGrail of New Hampshire. Larry also leaves behind his beloved brother Thomas F. McGrail, Jr. and his wife Patricia of Chadds Ford, PA, and his dear sister Mary-Margaret McGrail of Alexandra, Virgina. Larry was predeceased by his sister Judith and her late husband Al Pettirrossi, his sister Madeline and husband Joe Wiensko, and his sister Ellen McGrail. Larry also leaves an extended family that includes many beloved cousins, nieces and nephews across the country.

Larry was born in Worcester, MA on May 15th, 1938, to the late Thomas F. McGrail and Mary (Cunningham) McGrail and grew up on his beloved John Street where his story began. Larry was a parishioner of the Cathedral Church of St. Paul and graduated from St. John's High School on Temple Street in 1956. Larry often declared his time on Temple Street to be one of the most defining periods of his life, absorbing all the knowledge he could under the guidance of the Xavierian Brothers. Larry maintained a strong connection with the St. John's community as he understood the power of education and modeled himself after the school's motto, "In Harmony, Small Things Grow". Larry was honored at many Saint John’s alumni events for his generosity to the school.

Larry graduated from the College of the Holy Cross in 1960, and immediately set his sights on his lifelong love of science, teaching and learning with his students about the world around him. It was through his teaching that Larry discovered how the discipline of Physics both helped shape and explain the natural world. He was also an extremely proud and active alumnus of Holy Cross where so many of the experiences he gained there paved the way for his successful future. During his first two years of teaching Larry also earned a Master's degree in Natural Science from Worcester Polytechnic Institute in 1964. Larry taught at Wachusett Regional High School for five years, and another thirty one years at West Boylston Junior/Senior High School where he flourished as a passionate, distinguished and highly engaged educator with both staff and students. He also taught nights and weekends at Quinsigamond Community College, Johnson & Wales University, Central New England College, and finally at Northeastern University upon his retirement from West Boylston. His commitment and passion for teaching never went away.

Larry was blessed to marry Gail Elizabeth Riordan, the love of his life, and wife of 60 years. Larry and Gail went on to build a magnificent life together raising four children, sharing a passion for teaching and taking an active role in numerous community initiatives. Larry and Gail never left one another's side throughout all their years together. He loved and honored family in a selfless way.

Larry had terrific wit, a gift for conversation, a philosophy to keep life simple, and a spirit that welcomed new challenges and adventures. He also had a deep affection for Worcester's most celebrated Holy Cross sports icons from the 1940’s through the late 1970’s, namely: Jack “the Shot” Foley, Ron Perry Sr., his son Ron Perry Jr., Tommy Heinsohn, Togo Palazzi and Bob Cousy.

For the past 26 years, when Larry wasn't devoting his time to his children and grandchildren, you could find him engaging in his passions for: sailing, hiking, cross-country skiing, swimming, meticulously maintaining his pool, engaging in a variety of sports and assembling jigsaw puzzles. Larry cherished his time at he and Gail's weekend home in Grantham, NH, and his summer holidays in Newport, RI and Cape Cod, MA. He loved his extended Thanksgivings with his daughter’s family in Crown Point, IN, as well as his winter vacations with his son in Saint Petersburg, FL. He and Gail also looked forward to their annual tropical getaway to Aruba.