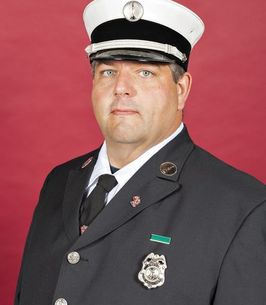 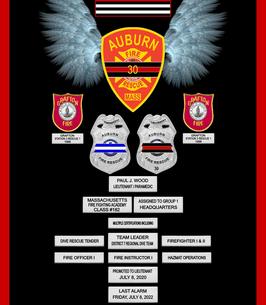 DOUGLAS/GRAFTON: Paul Wood, 42, passed away after a sudden illness on July 8, 2022.
Paul’s greatest joys in life were his wife Crystal and his three daughters, Kenley Rae, Adelyn Patricia, and Charlie Anne. An exemplary family man, Paul always made sure they came first and foremost. He was the perfect example of a model husband, father, and human being. Fatherhood was home for Paul and he couldn’t possibly have shared more of his love and time with his family.
In addition to his wife and daughters, he leaves behind his mother Jacqueline (Hersom) Wood, his siblings Ryan Wood and his wife Kerianne, Timothy Wood and his wife Holly Atchue, and Caroline Wood and her husband Travis Anderson, along with several nieces and nephews. His father Richard Wood predeceased him. He also leaves behind his extended close family of fellow firefighters.
Paul enjoyed summers at Mayflower Beach and relaxing by the lake at the family home in Fitzwilliam, NH. Paul was a career firefighter, talented drummer, and was an excellent cook. He could often be found doing yard work, or running to Home Depot for another one of his wife’s grand ideas.
Paul was a 20-year veteran of the Massachusetts fire service. He began his career as a call Firefighter in the town of Grafton in 1998. He was assigned to Station 3 and worked as part of Rescue 1, as a volunteer firefighter, until he was hired as a full time firefighter. While pursuing a firefighting career, Paul worked full time as an EMT in Worcester as well as surrounding towns. Paul received his paramedic certification and shortly thereafter, was hired as a career Firefighter/Paramedic for the Town of Auburn.
Paul graduated from the Massachusetts Fire Fighting Academy Class #182. Paul was assigned to Group 1 and worked out of Headquarters. Paul delivered EMS trainings to the group and aided with the inspection and maintenance of apparatus and equipment.
During his career, he obtained multiple certifications including Firefighter I/II, Hazmat Ops, Fire Instructor I, Fire Officer I and Dive Rescue Tender, including ice and surface rescue. He was an active member of the District 7 Regional Dive Team serving as a Team Leader. Paul was actively pursuing and obtaining the skills, knowledge, and abilities to aid him in his pursuit to become a company officer.
Paul’s favorite quote, “Rescue everyone and make it home safely” – Poppy
All are welcome to gather with Paul’s family and friends Wednesday July 13th from 4pm to 8pm at Roney Funeral Home 152 Worcester St. N. Grafton, MA 01536. His Funeral Mass will be celebrated Thursday July 14th at 11:00am at St. James Church 89 Main St. S. Grafton, MA 01560. Burial will be private. All attending the Funeral Mass are politely requested to go directly to the church. In lieu of flowers, donations may be sent to: On Site Academy PO Box 448 Westminster MA 01473
www.RoneyFuneralHome.com
PRINT