To share your memory on the wall of Armand Morin, sign in using one of the following options:

Provide comfort for the family by sending flowers or planting a tree in memory of Armand Morin.

Provide comfort for the family of Armand Morin with a meaningful gesture of sympathy. 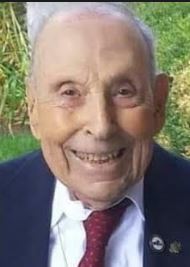 We encourage you to share any memorable photos or stories about Armand. All tributes placed on and purchased through this memorial website will remain on in perpetuity for generations.

Ann & Andy
I am so sorry for your loss. The word hero is thrown around a lot these but Armand was a true hero. He and all his comrades enlisted into WW2 "for the duration." Most people do not understand this sort of sacrifice and dedication to our country, Armand did.
Respectfully
George Nadeau
Comment | Share Posted May 09, 2020 at 08:52pm via Condolence
M


Dear Ann and family--I am so sorry to hear of the loss of your Father. He was such a sweet and loving gentleman. Roland enjoyed his company, too And losing him during these uncertain times makes life even more difficult.
Love,
Marcie