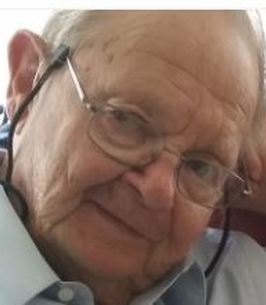 GRAFTON: Robert Gustaf Ellison, 94, of Grafton, died peacefully at home, surrounded by his family, on August 13th. He was born in Worcester on November 21, 1922, son of Raymond D. and Ellen S. Ellison, and lived in Worcester until 1960, when he moved with his family to Grafton. He graduated from North High School in Worcester. Bob served as a Staff Sergeant in the 8th Air Force Bomber Command, US Army Air Force during World War II. He was based in England and flew 34 B-24 bomber missions over Europe, was awarded three medals of distinction, and was honorably discharged in 1945. Bob worked as a toolmaker at the former W. M. Steele Company in Worcester, and then for 43 years at Lincoln Precision Machining in North Grafton, until his retirement in 2009. He was a lifelong member of Epworth United Methodist Church in Worcester and sang in the choir for over 70 years. He leaves his wife Doris (Hirtle) Ellison, a son, David, of Sandwich, and a daughter, Tina, of Boylston. He is survived by his brothers Victor and his wife Mildred of Pennsylvania, Herbert and his wife Jane of Norton, and several nieces and nephews. He was pre-deceased by a brother, Raymond and his wife Stella. Bob was a kind and generous man who loved his family and his church. He enjoyed working in his garden, playing with the family dogs, spending time on the beach in Hawaii and the Cape, and following the Red Sox. The family would like to extend a heartfelt thank you to the staff of Laura's Guardian Angels and Central MA Hospice for their kindness and compassionate care. Calling hours will be held at Roney Funeral Home, North Grafton, MA on Thursday, August 17, from 5pm to 8pm. Burial will be at the convenience of the family. A memorial service will be held at Epworth United Methodist Church on Saturday, August 26 at 2PM. Memorial contributions may be made to Abbey's House, 52 High Street, Worcester, MA 01609, or Epworth United Methodist Church Memorial Fund, 64 Salisbury Street, Worcester, MA 01609. A Book of Memories to share a memory of Bob is available online at: