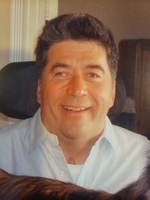 GRAFTON: On Monday, December 19th, after a short battle with cancer, David Aldrich, loving son, brother, uncle, and friend passed peacefully at the age of 65, surrounded by his sister Karen, her husband Rick, his dedicated caregivers, and friends.
He was born, October 22nd, 1957, in Worcester Mass.
He was raised in Grafton, MA, one of five children of the late Joseph and Margaret (Moonjian) Aldrich.
David is predeceased by his brother Peter Aldrich.
David is survived by his brother Paul and wife Sally, their Children, Jill Collins and family of Grafton Mass, Erin Hand and family of Grafton Mass, Krystle Grant and family of Stratham NH, and Brian Bishop and family of Framingham Mass. His Sister Karen Powell and husband Richard Powell, and their children, Jennifer Whitehead and family of Mechanicsburg, Pennsylvania, Megan Murphy family of Arlington South Dakota, Jeffery Powell of Atlanta Georgia, and Brother Bruce Aldrich and children Ryan Aldrich and family of Lancaster Mass. and Rebecca Manning and family of Lunenberg, Mass.
After graduating Grafton High School, David completed computer technology studies in Worcester Mass. Upon completing his education, he worked for Prime Computer until his love for the water and boats brought him from the New England area to the boating capital of the world in Southeast Florida. David eventually settled into his own home in Delray Beach, Florida.
David became a certified boat captain, and realized boating and captaining were his passion.
He enjoyed many years as a boat captain, and eventually moved into boat sales, for Marine Max.
David’s love for technology, music and the ocean were ever present in his life.
After David was paralyzed in a diving accident in 2002 and confined to a wheelchair, his disabilities did not stop him from establishing lasting friendships with his neighbors who loved and supported him. He continued to be a source of inspiration to many.
The family wishes to extend their gratitude to all of David’s caregivers.
All are welcome to gather with David’s family and friends Friday December 23rd from 11am-1pm at Roney Funeral Home 152 Worcester St. N. Grafton MA 01536 followed by a prayer service at 1pm in the funeral home. He will then be laid to rest at Riverside Cemetery in Grafton. Those wishing to attend David’s service via live stream may do so with the attached url
https://client.tribucast.com/tcid/8703975012
In lieu of flowers please honor David with a donation to The Baptist Church of Grafton 1 South St. Grafton, MA 01519 or First Congregational Church 1415 NK St. Lake Worth,FL 33460.
A Book of Memories to share a message with David’s family is available online at:
www.RoneyFuneralHome.com