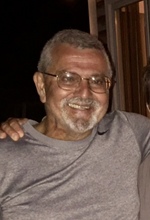 George V. Palermo, 71, tragically passed away on May 4, 2022 following complications from a surgical procedure.

He leaves his loving wife of 48 years, Sally (Flynn) Palermo, his children Marino Palermo, Ann Larrabee and her husband Lewis Larrabee the 3rd and Anthony Palermo.
His grand children Vivianna George and Lewie the 4th.

His brother Frank Palermo and wife Ann Marie as well as his sister Amy Tomaiolo and her husband Lenny. His sister-in-law Jane Palermo and in-laws Larry Flynn, Kevin Flynn and his wife Diane and Barbara Flynn who were all very close to George throughout his life.
George had many nieces, nephews as well as grand-nieces and nephews whom he loved and adored like his own children.

George was predeceased by his brother Vincent Palermo and his brother-in-law Dennis Flynn.

George was born November 24, 1950 in Worcester, son of the late Yolanda (Pedone) and Marino Palermo.
His roots were formed in the Burncoat neighborhood in Worcester.
Specifically at his family owned and operated Saveway Market. It was here where he learned the value of hard-work but more importantly built life long friendships with childhood friends that he considered family.

George graduated from Assumption College in Worcester where he earned both his Bachelor’s and Master’s Degrees, respectively.

He spent his career in IT and software development. Working several years at GM in Framingham, then Fallon Healthcare and National Grid.

Away from work George loved nothing more than being surrounded by family and friends, enjoying a great meal while everyone laughed and smiled at the countless stories he told with such enthusiasm and detail.

George’s passion and excitement for life was endless.
Whether it was planning the next family vacation, finding a new restaurant to try or taking a spontaneous ride in his Corvette.

Some of George’s favorite hobbies were Wood working, Scuba Diving, riding his Harley, making his famous homemade pasta, and hacking it up on the Golf Course. His greatest joy was watching his grandchildren play sports and could always be heard cheering loudly for them and their teammates.

George defined what is was like to be a people person. Whether it was someone he just met or a life long friend. He always went out of his way to strike up a conversation and genuinely care about people.

This is just one of countless reasons he is loved and missed by so many.

All are welcome to gather with George’s family and friends Tuesday May 10th from 4pm to 7pm at Roney Funeral Home 152 Worcester St. N. Grafton, MA 01536.
His Funeral Mass will be celebrated Wednesday May 11th at 11:00am at St. Mary’s Church 17 Waterville St. North Grafton, MA 01536. Burial will be private. A Book of Memories to share a special message with his family is available at:
www.RoneyFuneralHome.com