In Memory of
Richard S.
Guyette
1946 - 2021
Click above to light a memorial candle.
Memorial Candle Tribute From
Roney Funeral Home
"We are honored to provide this Book of Memories to the family."
View full message >>>
Send Flowers
Plant a Tree In Memory of Your Loved One
Click Here
Menu 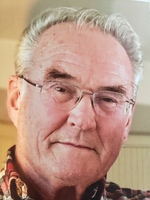 SOUTH GRAFTON: Richard S. Guyette, 74, passed away March 16, 2021. His wife Dawne (Wing) Guyette passed away in 2011. Rich leaves his daughter Lisa Guyette, son Craig Guyette and his wife Erin and daughter-in-law Kandy Chretien. He also leaves his grandchildren Kyle and Ryan Pellerin and Branden and Brianna Guyette, his brothers Raymond Guyette, Jr. and Ronald Guyette and several nieces and nephews. He was predeceased by his sister Anne Marie Kuczka. Rich was born November 25, 1946 in Worcester, MA, son of the late Jane (Robinson) and Raymond Guyette, Sr. His roots were in Shrewsbury but he was a long time resident of Grafton where he lived with his wife Dawne and their children. Rich was the owner and operator of Guyette Electric for many years until his retirement. Away from work he prized time with his family, enjoyed coaching Grafton Lakers Youth Hockey for 20 years, and recently you might have spotted Rich in his 2017 Corvette which came to be known as “Nadine”. All are welcome to gather with Rich’s family and friends Saturday March 20th from 10am-12pm at Roney Funeral Home 152 Worcester St. N. Grafton, MA 01536. Funeral services and burial will be private. A Book of Memories to share a special message with Rich’s family is available at:
www.RoneyFuneralHome.com
Printable
Share on Facebook
Obituaries
About Us
Our Services
Funeral Planning
Grief & Guidance
Flowers
Facebook