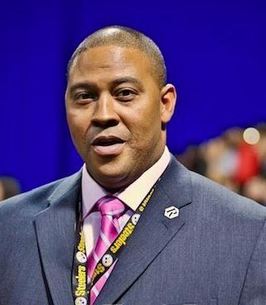 Obituary for Keith B. Love

GRAFTON: “If you want to lift yourself up, lift up someone else” – Booker T. Washington. These were words that resonate if you knew Keith Love. Keith’s unique combination of love, loyalty and larger than life personality had a way of bringing out the best in everyone and leaving all that were touched by him with a smile.
Keith passed away at home in Grafton surrounded by his family in the peaceful early morning on May 26, 2020 after several years of managing a difficult struggle with cancer. Simply saying he’ll be missed in no way does him justice, but all of us and the world he left are better because of him.
Keith was born July 29, 1966 in Camden, New Jersey, son of the late Joyce Love and Raymond Davis. He spent his early years there before he eventually finding his way to New England where he studied at Boston College and where he met the love of his life and wife of 23 years, Tracy Frederico. Keith’s passion and energy led to a career in the Boston Public School system, where most recently he was co- HeadMaster at Tech Boston Academy. In his role, Keith advocated for his students and community for 20 years. Keith became an integral part of the culture there, serving as a mentor, father figure, and role model. He was best known for the connections and relationships he forged every day while he productively improved the school’s quality and resources.
Away from work Keith was a competitor on the golf course or even around the table playing a game of pitch with his family. He was devoted to his family, particularly his son Joshua Love and the many nieces and nephews whose activities and games he seldom missed even as his health worsened. On a Sunday afternoon in the fall you could count on Keith to passionately cheer for his beloved Pittsburgh Steelers.
In addition to his wife Tracy, Keith also leaves his son Joshua Love, his grandmother Elizabeth Dickerson, sister Angela Simmons, brother Warren Griffin and stepsisters Jessica Davis and Shaun Rai Whitney, his mother and father-in-law Bonnie and Thomas Frederico, sisters-in-law Tammi Marois and her husband Kirk and Elizabeth Otis and her husband Mark, his beloved nieces and nephews Nicholas Love-Nixon, Antonio and Alexander Toplyn, Max and Isabella Marois and Madison and Zachary Otis. He was predeceased very recently by his mother Joyce Love-Wilcox and stepfather Walter Wilcox.
Keith made friends wherever he went, too numerous to list, but always remained loyal to his close friends from his early years. He would especially want to thank two retired firefighters, Reynold Maughn and Al Ashley, who he relied on in his final days.
Due to the current environment Keith’s immediate service and burial will be private, but a larger celebration of life will be scheduled at a later date. Funeral arrangements are under the care of Roney Funeral Home in North Grafton. Please honor Keith in lieu of traditional remembrances with a donation to a scholarship in his memory at https://www.gofundme.com/f/keith-love-scholarship. A Book of Memories to share a favorite story or message with Keith’s family is available online at:
www.RoneyFuneralHome.com
PRINT
Plant a Tree in Memory of Your Loved One
An Honouring a Life memorial tree is a unique tribute which provides global benefits like no other memorial gift could.
Plant a Tree
Family Log-In