In Memory of
William J.
McElroy
1924 - 2019
Click above to light a memorial candle.
Memorial Candle Tribute From
Roney Funeral Home
"We are honored to provide this Book of Memories to the family."
View full message >>>
Send Flowers
Plant a Tree In Memory of Your Loved One
Click Here
Menu 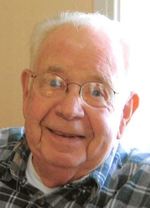 GRAFTON: William J. “Bill” McElroy, 94, passed away peacefully April 25, 2019 at Beaumont Nursing and Rehabilitation in Northbridge. He leaves his children Kathleen Alix and her husband James and Timothy McElroy and Amy Gavalis, his brother Charles McElroy, sister Mabel Austin and brothers-in-law Earl Stanley and Raymond LeBlanc, his grandchildren Matthew and Benjamin Alix and Kaitlin McElroy, great-grandchildren Brayden, Keegan, Chase and Brooklyn Alix and many nieces and nephews. He was predeceased by his first wife Rita (Swenson) and former wife Doris Stanley, his brothers Francis and John McElroy and sisters Sarah LeBlanc and Mary Patenaude. Bill was born September 24, 1924 in Worcester, MA son of the late Mabel (Anderson) and William J. McElroy. He grew up in Worcester and went on to serve in the U.S. Army Air Corps during World War II. Bill was known throughout his life for his hard working hands; even as a young man he woke early and delivered milk with this father for Hillcrest Dairy by horse and cart, he earned his living as an electrician working as a Foreman for Coughlin Electric for many years. He and his wife Rita were known to spend weekend nights going dancing and they also took memorable trips together across Europe, even one that found Bill belly dancing in Tangiers. Later in life he and Doris would travel to the American Southwest, particularly Arizona. Closer to home Bill was the man you could always rely on for help or if you needed something fixed. His talented hands made beautiful pieces through his woodworking or crafting metals. In lieu of flowers please honor Bill with a donation to The Parkinson’s Foundation at www.Parkinson.org. All are welcome to gather with Bill’s family for a calling hour on Tuesday April 30th from 9:30-10:30at at St. Mary’s Church 17 Waterville Street N. Grafton, MA 01536 followed by the celebration of his Funeral Mass at 11:00am in the church. He will then be laid to rest at Pine Grove Cemetery in North Grafton. A Book of Memories to share a memory of Bill or message of sympathy with his family is available online at:
www.RoneyFuneralHome.com
Printable
Share on Facebook
Obituaries
About Us
Our Services
Funeral Planning
Grief & Guidance
Flowers
Facebook