Obituary for Richard B. Renaud Sr. 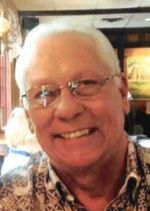 NORTHBRIDGE: Richard B. Renaud, Sr., 72, passed away peacefully at home Sunday December 23, 2018. He was the son of the late Edward Sr. and Rose (Girouard) Renaud.
Richard was predeceased by his son, and best friend, Richard “Rick” Renaud Jr. Richard leaves behind his granddaughters, and lights of his life, Reagan and Riley Renaud of Longwood, FL. Mr. Renaud is also survived by his brother Michael Renaud and significant other Judy of Worcester, brother Edward Renaud and significant other Sue of Northbridge, brother William Renaud and significant other Mary of Grafton, brother Ronald Renaud and wife Margaret of Yarmouth and brother Thomas Renaud and his wife Susan of Sutton. Along with his brothers Richard leaves many nieces and nephews, including his niece Alissa Renaud and her daughter Tori Renaud of Sutton to whom he was incredibly close. Richard also leaves many friends that he thought of as family, including Glenn Lopes of Yarmouth whom he thought of as a son.
Richard lived for his family, especially his granddaughters, and believed that you should live life to the fullest and always be having fun in whatever you do. His favorite pastime was fishing with his son on the shores off Cape Cod and New Smyrna Beach, FL, both of which he resided for some time. When you were with him, you were guaranteed to hear stories of fun adventures, have non-stop laughs and forget about your troubles. Those who are lucky enough to have known Richard know that he was always a reliable source for life lessons and words of wisdom. Richard always wanted to be sure those around him were smiling, and at that he succeeded.
Richard was the type of man who knew what it meant to love unconditionally and without judgement. He believed in forgiveness, respect and truly saw that there was good in everyone. He was the type of man you could turn to and receive advice that was sound, rational and coming from a place of love. Richard was truly a gentleman, a genuine man and will be greatly missed by all who knew and loved him.
Services were held privately at Roney Funeral Home in North Grafton. In lieu of flowers please make a donation to The American Heart Association in honor of Richard’s late son, Rick Renaud at www.heart.org.
www.RoneyFuneralHome.com