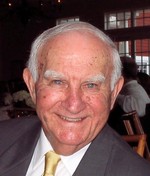 GRAFTON: It is with deep sadness that we share the news of the passing of our dear Dad, Alfred James (Cooney) Cardin on October 6th, 2018. He was at home surrounded by his loving family. He personified a Christian man who served his family, friends & community his entire life. He will be deeply missed.
Alfred was born on June 21st, 1923; he was one of 8 children born to Margaret & Alfred Cardin. Cooney married the love of his life, Marie Rita Richard who passed away in 2011. They were married for 67 years & were truly a love story. Alfred leaves 4 devoted children; Susan with whom he lived, Thomas & his wife Heather, Bob & his wife Patty, and Mary Ann Martin & her husband Steve. He also leaves 9 Grandchildren & 9 Great Grandchildren; Holly, Pete, Eli, Gretel & May, Hannah, Meghan, Erik, Aaron Alfred, Violet Marie & Bella Rose, Brooke, Laura & Orie, Harris, Rye Marie & Shea, Katelyn & Lauren, Justin & Deanna, Jason & Nicole & Taylor & Kourtney. He is survived by a brother, Albert Cardin, his relatives, his many nieces & nephews & dear friends. He was predeceased by his brothers Francis, Walter & Robert and sisters Mable, Doris & Evelyn.
Alfred served as an altar boy at St. James Church in So. Grafton and was a member of the Parish for most of his life. He went on to graduate from St. John’s High School in 1941 & attended Worcester Junior College. He enlisted in the Navy in 1942 to serve his country as a Radio Technician on a destroyer & tanker in the North Atlantic for 3 years. During his time in the service, he received the American Ribbon, a World War II Victory Medal, the European-African-Middle Eastern Ribbon & Point System. When he returned home, he worked as the Personnel Manager at the Wuskanut Mills in So. Grafton. He also worked at the Ames Worsted Company in Southbridge until it closed. Alfred was one of the founders of Westwood Textile Mills in Southbridge and became the Treasurer & Director for 29 years. He retired at 59 years old.
After moving to Westborough, he was a member of St. Luke the Evangelist Parish in Westborough & then St. Mary’s Parish in North Grafton.
In his younger years, Alfred loved & played baseball in the Old Blackstone Valley League. He was very involved with St. James Parish; coaching the basketball team, The Prayer Group & St. Vincent de Paul Society. In his later years, he enjoyed playing golf & tennis.
Cooney will be remembered for his Faith, love & devotion to family.
In lieu of flowers, donations can be made to the Haiti Mission of Rev. John Henault O.M.I. Haiti Mission, 29 Blackstone Street, Sutton, MA 01590.
Calling hours will be held at Roney Funeral Home, 152 Worcester Street in North Grafton on Tuesday, October 9th from 4 to 7 p.m. The Funeral Mass will be celebrated on Wednesday, October 10th at 11 a.m. at St. James Church, 89 Main Street in South Grafton. All attending the Funeral Mass are requested to go directly to church. He will then be laid to rest at Fairview Cemetery. A Book of Memories to share a memory of Cooney is available online at:
www.RoneyFuneralHome.com