In Memory of
Irene
Mombourquette (Paquette)
1915 - 2018
Click above to light a memorial candle. 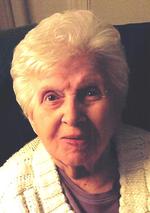 MILFORD/GRAFTON: Irene Mombourquette of Milford, formally of South Grafton, passed away on January 1, 2018 at the age of 102. Born Marie Irene Edna Paquette on June 11, 1915, in the Linwood section of Northbridge, Ma., she was the daughter of the late Elizabeth Gosselin and Cleophas Paquette. She grew up in Whitinsville and attended schools in Northbridge until old enough to take a job to help support her family during the depression. On November 26, 1936, a snowy Thanksgiving Day, in the Church of St. Patrick, Whitinsville, she and Charles Mombourquette were married, a marriage that lasted 54 years until his death in 1990. They made their home in South Grafton where they raised their three children. Irene was a 79 year resident of South Grafton, only moving to Milford after her 100th birthday. She leaves her son Charles Mombourquette and his wife Kathleen of Sutton, her daughter Joan Venincasa and her husband Alfred of Sutton and her daughter Alice Bucca and her husband Robert Randolph of Panama. She also leaves 11 grandchildren, 26 great-grandchilddren, 14 great-great-grandchildren, nephews and nieces, cousins and extended family and friends. Besides her husband, she was predeceased by an infant daughter, her brother Joseph George Paquette, a sister, and 4 grandchildren; Steven and Timothy Small, and Matthew and Suzanne Mombourquette. Always a hard worker, Irene worked for several companies. One of her first jobs was working at the Merrimack Hat Factory in the Knowlton building in Upton. After her children went to school she took a job at Tupper’s Plastic Co., then worked at Vultour’s Express and later as a cost accountant at Whitins Machine Works until her retirement. She and her husband Charles in their retirement years, built a summer cottage in Cape Breton, Nova Scotia where they spent several months each year, often bringing grandchildren with them. They also made several winter trips to Florida. A willing traveler, Irene took many vacations with her daughters driving to Virginia, Quebec, Montreal, Nova Scotia and flying to California. Irene was an avid reader. She loved to cook, knit and crochet and was an excellent seamstress. She enjoyed playing games, especially cribbage with friends. She was a former member of the Grafton Seniors and served for a while as secretary. She was a woman of great faith usually spending much of early morning in prayer and attended Mass regularly until her later years. She was a longtime parishioner of St. James Parish where she sang in the choir with her daughters and encouraged them to pursue their talents so they could serve the church. She was the core of her family and will be sorely missed by them. All are welcome to gather with Irene’s family on Friday, January 5th from 4pm to 7pm at Roney Funeral Home, 152 Worcester St., No. Grafton, MA. 01536. Her Funeral Mass will be celebrated on Saturday, January 6th at 11am in St. James Church, 89 Main St., So. Grafton, MA 01560. She will then be laid to rest at Fairview Cemetery in South Grafton. Please honor Irene by always keeping the family and those you hold dear close to you. In lieu of flowers, donations may be made to your local food bank, Elder Services, Meals on Wheels or a charity of your choice. The family would like to thank the entire staff at Countryside Health Care in Milford as well as the doctors and nurses at Milford Regional Hospital for their thoughtful loving care of Irene in her last days. A Book of Memories to share a memory of Irene is available online at:
www.RoneyFuneralHome.com
Printable
Share on Facebook
Recently Shared Condolences
Leave a Condolence
View All Condolences
Recently Lit Memorial Candles
Light a Memorial Candle
View All Candles
Recently Shared Stories
Share a Story
Recently Shared Photos
Share a Photo
View All Photos