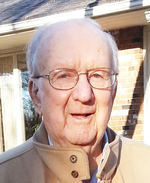 GRAFTON: Albert W. Ratkiewicz, 92, passed away December 18, 2017 at Beaumont Nursing and Rehabilitation in Northbridge. He was predeceased by his beloved wife of 43 years, Jennie (Stefancyk) Ratkiewicz, in 1991. He is survived by his son Kenneth Ratkiewicz and his wife Eileen of Sebastian, FL, his daughter Susan Daisey and her husband Paul of Silver Spring, MD; his granddaughter Bonnie (Ratkiewicz) Hentosh and her husband Justin of Portland, OR; his grandson Brian Daisey of Silver Spring, MD; his granddaughter Diana Daisey of Washington, DC, his sister Bertha McMahon of McLean, VA; and many nieces, nephews, grandnieces and grandnephews. He was also predeceased by his sister Helen Ratkiewicz and his longtime friend, Esther Ozarowski of Worcester. Albert was born in South Grafton, MA, son of the late Kazimierz and Elzbieta (Branowicka) Ratkiewicz. He graduated from Grafton High School and Worcester Boys Trade School. He served in the US Army during World War II in the European Theater as a Corporal in the 42nd Rainbow Infantry Division. He worked as a Mechanical Engineer for Norton Company for 29 years, retiring in1985 and was instrumental in the start-up of a Norton plant in Kolo, Poland in the 1970’s. Away from work he was the Treasurer of the Polish National Home in South Grafton, a volunteer fireman for the Farnumsville Fire Department, and a member of the Grafton Finance Committee. Albert enjoyed Polish music, dances, and picnics. He like tending to his garden, maintaining his home, cooking, and baking pies. He devoted much time and talent in the care of his children and grandchildren, traveling several times each year for extended family visits to Maryland and Virginia. He was known for his kind and gracious manner, integrity, and sense of humor. He was a lifelong member of St. James Church. Heartfelt thanks go to the staff of the following organizations, to which memorial donations may be made: Whitney Place Assisted Living 85 Beaumont Drive PO Box 940 Northbridge, MA 01534 or Salmon VNA and Hospice 37 Birch St. Milford, MA 01757. All are welcome to gather with Albert’s family Saturday December 23rd from 9:30-10:30am at Roney Funeral Home 152 Worcester St. N. Grafton MA 01536. His Funeral Mass will be celebrated at 11:00am at St. James Church in South Grafton. He will then be laid to rest with military honors at St. Patrick’s Cemetery in Whitinsville. A Book of Memories to share a memory of Albert or message of sympathy with his family is available online at:
www.RoneyFuneralHome.com
Printable
Share on Facebook
Recently Shared Condolences
Leave a Condolence
View All Condolences
Recently Lit Memorial Candles
Light a Memorial Candle
View All Candles
Recently Shared Stories
Share a Story
View All Stories
Recently Shared Photos
Share a Photo
View All Photos