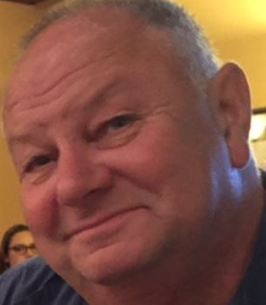 GRAFTON/FITZWILLIAM,NH: Richard J. “Dick” Wood, 62, passed away October 3, 2017 following a short illness. He leaves his wife of 39 years, Jacqueline “Jackie” (Hersom) Wood, his children Paul Wood and his wife Crystal, Ryan Wood and his wife Kerianne, Timothy Wood and Holly Atchue and Caroline Wood and Travis Anderson, his grandchildren Kenley Rae, Adelyn Patricia, Charlie Anne,Lily,Mia,Noah,Brady and Leo, his brother Alvin Wood and his wife Linda and sister Anne Gregory and her husband Paul and several nieces and nephews. He was predeceased by an infant brother Paul Wood. Dick was born July 16, 1955 in Worcester son of the late Rosemary (Hall) and Alvin Wood. His roots and most of his life were spent in Grafton. For more than 30 years he was the owner of South End Service in South Grafton. Dick was a true “motorhead” from an early age. He found his way into drag racing with Central Mass Drag Races Association (CMDR) and won championship races from 2007 – 2010, racing mostly at New England Dragway in Epping,NH. Away from his garage and the track he centered on family finding time for his children and grandchildren whenever he could. The family vacation home in Fitzwilliam, NH brought many joy filled summers to Dick and his family and recently was renovated to become his retirement home with Jackie. He could easily be found sailing his sunfish around on his own or towing his grandchildren in tubes or water skis behind his boat. In lieu of flowers please honor Dick with a memorial donation to Fire Rescue and EMS Association of Fitzwilliam c/o Kathy Hodgkins PO Box 425 Fitzwilliam, NH 03447 or Pit Bull Rescue Central PO Box 355 Fulton,MO 65251. All are welcome to gather with Dick’s family Sunday October 8th from 2pm – 5pm at Roney Funeral Home 152 Worcester St. N. Grafton, MA 01536. A Funeral Mass will be celebrated for Dick Monday October 9th at 10:30am at St. James Church 89 Main St. S. Grafton, MA 01560. All attending the Funeral Mass are requested to go directly to church. Burial will be private at a later date. A Book of Memories to share a memory of Dick is available online at:
www.RoneyFuneralHome.com
PRINT