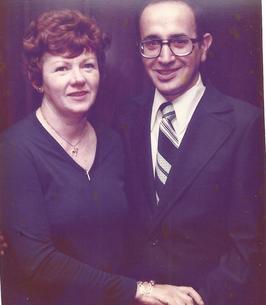 Obituary for George A. Mahassel

GRAFTON: George passed peacefully on Monday, October 2, with the same humility and dignity with which he lived. He was the fourth of nine children, born just prior to the Depression to Anne and Arthur Mahassel.
George will best be remembered as a hard working family man who led by example and expected nothing in return. He served in the Army during the Korean War, served his church, St George Orthodox Cathedral, as a member of the Men's Club and rarely missed a Sunday service. He was a dedicated husband and father who set the bar high but remained humble. He was a kind friend who never said a bad word about anyone and no one ever had a bad word to say about him.
George religiously visited his wife in the Beaumont Nursing Home for the past four years and took time to talk with every staff member. He was well known and loved dearly by each aide, director, cafeteria employee, and member of the medical staff.
George also loved to spend time with his siblings, children, grandchildren, nieces & nephews, and friends, follow the Red Sox and Patriots, read about history, walk the neighborhood, and keep tabs on the lowest gas prices around.
If a life is measured by those that surround you as the end nears, George was wealthy beyond measure.
George was predeceased by his brothers Joseph, Albert, Edward, Raymond, Charles, and sister Shirley. He will be sorely missed by his surviving brother Richard and sister in law Carol of Grafton, sister Mary of Worcester, sister in law Rachel of Danbury, CT, daughter Maria, son in law David, son George, Jr., daughter in law Ami, his four grandchildren, countless nieces, nephews, and friends.
If you choose to honor George with a donation, please consider the Alzheimer's Association, 309 Waverly Oaks Rd, Waltham, MA 02452 or St George Orthodox Cathedral, 30 Anna St, Worcester, MA 01604. All are welcome to gather with George’s family Thursday October 5th from 4pm to 7pm at Roney Funeral Home 152 Worcester St. N. Grafton, MA 01536. A funeral service for George will be held Friday October 6th at 10:00am at St. George Orthodox Cathedral 30 Anna St. Worcester, MA 01604. He will then be laid to rest at Hope Cemetery in Worcester. A Book of Memories to share a memory of George is available online at: