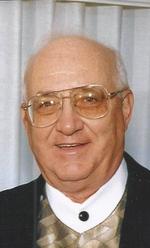 ACTON: Bernard D. Bouvier, 82, formerly of Acton, passed away January 13, 2017 after a brief illness. He is survived by his wife of 54 years, June C. (Winters) Bouvier, his sons Joseph Bouvier, MD and his wife Andrea, Stephen Bouvier, Edward Bouvier and his wife Robin, Thomas Bouvier and his wife Marie, his grandchildren, Samantha, Alessandra, Laura, Maria, Josephine, Tess, Sarah, Isabel and Garret, and his brother Roland Bouvier. Bernard was born April 10, 1934 in Lake Placid, NY, son of the late Blanche (Douglass) and Hermas Bouvier. He grew up in New York and after earning his Bachelor's Degree from Middlebury College began working for New England Life where his career spanned 38 years. He and June met and married in Kansas City, then settled in Acton where they raised their family. They spent his early retirement years on Fripp Island, South Carolina and more recently their home was in Grafton. Bernard was a passionate sports fan, played hockey for Middlebury and coached Acton Youth Hockey and Little League baseball. He treasured fishing trips to Cape Cod with his sons and hunting trips with his brother Roland. He prized time with his family above all else. All are welcome to gather with his family and friends Wednesday, January 18th from 4pm to 7pm at Roney Funeral Home, 152 Worcester Street, N. Grafton, MA 01536. A Funeral Mass will be celebrated for Bernard on Thursday, January 19th at 10:00am at St James Church, 89 Main Street Street, S. Grafton MA 01560. Burial will be private at his family's convenience. In lieu of flowers, you may donate in his memory to your favorite charity. A Book of Memories for Bernard is available to share a memory, story or message of sympathy with his family online at:
www.RoneyFuneralHome.com
Printable
Share on Facebook
Recently Shared Condolences
Leave a Condolence
View All Condolences
Recently Lit Memorial Candles
Light a Memorial Candle
View All Candles
Recently Shared Stories
Share a Story
Recently Shared Photos
Share a Photo
View All Photos