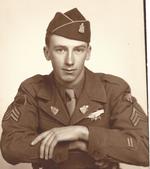 GRAFTON: James F. Kneeland, Jr., 91, passed away October 25, 2016 surrounded by his loving family. He is survived by his beloved wife of 66 years Ellen V. (Hannon) Kneeland, his children Mary Ellen Guillory, Catherine Rhodes and her husband Jesse, James F. Kneeland III and his wife Ramona, Peter Kneeland, Ann Carlson and her husband John and Daniel Kneeland, his sister Margaret Summers and her husband George, 7 grandchildren, 8 great-grandchildren, his sister-in-law Theresa Kneeland and brother-in-law Dr. George Kozak, and many nieces and nephews. He was predeceased by his brother John Kneeland and his sisters Mary Orzeck and Helen Kozak. Jim was born November 4, 1924 in Millbury son of the late Anne (Connor) and James Kneeland. His family moved to Grafton when he was 9 years old and he lived in town for the rest of his life. He graduated from Grafton High School Class of 1942 and joined the U.S. Army where began a storied tour of duty serving his entire tour with the 14th Armored Division as an Infantry soldier. He was promoted to the rank of Sergeant on the battlefield and earned 2 Bronze Service Stars for valor for his courageous service. Jim’s service was also noteworthy as he took part in the liberation of Stalag 7A in Moosburg, Germany which was the largest prisoner of war camp in the entire European theatre which housed more than 110,000 Allied prisoners. More recently Jim was appointed the Chevalier Legion of Honor by decree of the President of France. Throughout his life Jim became a military historian, sharing his first-hand accounts of his service and helping countless other families of veterans that reached out to him for details about their loved ones who served alongside him. Following his military service he worked for NE Telephone and Nynex for more than 33 years and was a member of the Telephone Pioneers of America. Away from work he was a steward and Eucharistic Minister at his beloved parish of St. Mary’s in North Grafton, coached Little League Baseball for many years and was known for his giving nature and generosity to his community. During summers he followed the Boston Red Sox and in the fall was a devoted fan of the New England Patriots and Holy Cross athletic teams as well. He also traveled up and down the East coast watching his brother-in-law George Summers who was a champion auto racer. In lieu of flowers please honor Jim with a memorial donation to St. Mary’s Church c/o Market Sunday 17 Waterville St. N. Grafton, MA 01536. All are welcome to gather with Jim’s family and friends Friday October 28th from 4pm to 7pm at Roney Funeral Home 152 Worcester St. N. Grafton, MA 01536. A Funeral Mass will be celebrated for Jim Saturday October 29th at 10:00am at St. Mary’s Church in North Grafton. He will then be laid to rest with military honors at St. Phillip’s Cemetery in Grafton. Please visit an online guestbook for Jim and share a message of sympathy with his family or a special memory at:
www.RoneyFuneralHome.com